The Governing Principles of Ancient China

1.Society that Coexisted in Prosperity

The Tang dynasty in China was an era of multifaith harmony and multiculturalism that coexisted in wonder and in prosperity. One of the emperors, Li Shimin, was a man of great magnanimity. He embraced and encouraged all. He humbly learned from each religious teaching and the teachings from various saints and sages. His actions inspired a whole generation of people to learn from saints and sages. Not only was he a benefactor of Buddhism, he was also a patron of all religions. He truly valued all religions, and he tried to maintain and protect them. Each religion was embraced and treated with equality. He regarded the virtuous and learned practitioners in each religion as the national teachers, and he consulted with them often.

In the ninth year of Li Shimin’s rule, on the arrival of Christian priest Alopen, Emperor Li Shimin ordered Prime Minister Pang Xuanling to greet Alopen at the outskirts west of the capital. In the twelfth year, Emperor Li Shimin ordered the building of a Persian Temple by Imperial Decreed and permitted the preaching of its religion. Another church was built in Yi Ning Fang in Chang’an, the capital of the Tang dynasty.

Islam was also introduced to China during the Tang dynasty because of interactions with Arabian countries. At that time, Prophet Mohamed was still alive and Waqqas, his disciple, went to Guangzhou and spread the teachings of Islam. The Tang government showed great acceptance and respect to the Muslims. The then emperor also assisted in building a mosque by imperial decree for the settlement of the Muslim soldiers who came to China.

The Tang government treated all religions equally, as it knew religions were the good education of wisdom and experiences given by God and saints. Such teachings will teach and transform the public so the government can help the people live in harmony and, thus, help stabilize the society in peace. Dr. Toynbee once said that if he could choose to relive his life, he would abandon twentieth century London for China’s seventh century Chang’an. 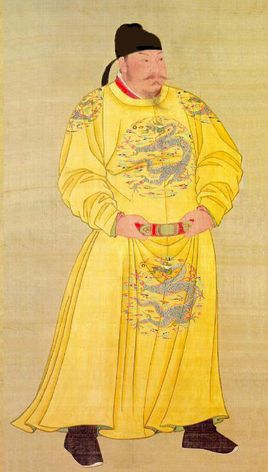 2.The Book that Leads to Stability and a Better World—The Governing Principles of Ancient China

The most significant achievement 50 during Emperor Li Shimin’s reign was the compilation of the book on governance:, The Governing Principles of Ancient China (Qunshu Zhiyao).

The Governing Principles of Ancient China was compiled at the imperial decree of Emperor Li Shimin at the beginning of the Zhenguan Era, (599-649). He ordered his advisors, among them Wei Zheng and Yu Shinan, to select essential passages that provided insight into how past emperors governed the country. The passages were to come from the historical records, the Six Classics, the Four Collections of History, and texts from the Hundred Schools of philosophy. From these, the advisors were to extract the most important passages related to (1) cultivation of oneself, (2) managing the family properly, (3) governing a country successfully, and (4) bringing peace and equality to the world. The resultant compilation is The Governing Principles of Ancient China, with excerpts from 14,000 books, 89,000 scrolls of ancient writings—500,000 words in all that covers sixty-five categories of books dating from the era of the Five Legendary Emperors to the Jin dynasty.

This is an invaluable book, which if used in the present time, it would allow us to examine and learn from our ancient history; and if passed down to our descendants, it would help and plan for our children in the future. Emperor Li Shimin was extremely pleased with the broad coverage and the concise nature of the compilation, and read the book daily. He said to those in charge of the compilation, “I owe it to you, my ministers, who have equipped me with knowledge of the past, so I would not be in doubt when confronted with various issues.” The compilation had obviously contributed to the subsequent peace and prosperous period of the Zhenguan Era. This treasure is invaluable for all who are involved in the political arena.

The ancient cultural teachings of our ancient saints and sages can bring lasting stability and peace to the entire world. The most critical factors are for the learners to truly comprehend this traditional culture and eliminate doubt and have faith in it. Traditional culture and the teachings of the saints and sages is the natural outpouring of our true nature. These teachings transcend space and time; they are everlasting. The key to effective learning comes down to two words: sincerity and respect. Without sincerity and respect for the teachings of the saints and sages, even if one read through every page of all the sacred texts, one would study in vain without real benefit. Confucius, the great sage who was well known to be a polymath, when talking about traditional culture and values, stressed that he only “retold ancient teachings and he did not create anything new” and he “believed in and favored the ancient teachings.” These famous words expressed his sincerity and respect within. That is why he attained such a high achievement. He has been regarded as the “Most Venerated Sage Teacher” and is the “Role Model for Teachers Throughout All Ages.” Confucius was a role model for us all in learning sincerity and respect.

Dr. Sun Yat-Sen, in his speech on the Three Principles of the People (“Principle of Nationalism 4th Lecture”), said, “The advancement in science and material civilization in Europe only happened in the last two hundred years or so. When it comes to the essence of political philosophy, Europeans can still turn to China for answers. Many people have come to appreciate how German scholars have contributed to the general knowledge of humanity. At the same time, German scholars are devoting their time to study the philosophies of China as well as Buddhism from India, to help us understand and remedy the inherent bias of modern science. 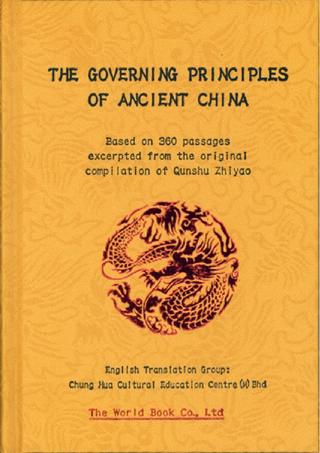 The Governing Principles of Ancient China is the essence of Chinese political philosophy and can serve not only as an important reference book for leaders of all countries to make political decisions, it can also remedy the bias of modern science.

The ancient Chinese have passed down their wisdom, principles, methods, experiences, and results on the governing of a country. Such a wealth of experiences has been accumulated over thousands of years and endured the test of time. The Governing Principles of Ancient China, is invaluable and meaningful, especially for our modern world. Should all, including leaders at different levels, in various political parties, and of different countries, be able to bilaterally learn from these books and deeply understand it and implement its teachings, the day will soon come when a harmonious society and a world with equality and peace will be realized.