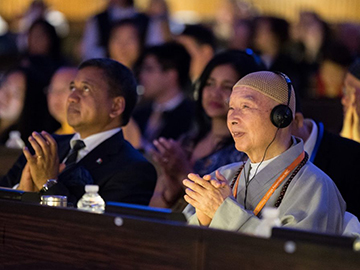 The first goal of ancient Chinese education was to ensure that the affection between parents and children would remain unchanged during their lifetimes. The second goal was to enhance this sincere love and to expand its scope to include the family, brothers and sisters, the community, society, the country, humankind, and even all beings. One should love not only humankind but also animals, trees, flowers, and grass. This was the concept, and it was the desired goal of Chinese education to expand the scope of this love.

Chinese education i s a teaching of benevolence and justice, love, and supreme harmony. It does not teach one to compete for selfish gain. Therefore, children should be taught to give precedence to others at a young age. In addition to learning to refrain from competing with others, they should also learn to sacrifice themselves. It is different from today’s education, which starts teaching competition in kindergarten. Competition denotes selfishness. When children are taught to compete for recognition and selfish gain at a young age and are instilled with the concept of benefiting oneself at the expense of others, as grownups they will not realize that bene ting oneself at the expense of others is wrong. Therefore, the teaching of love teaches people to love others as they love themselves, always thinking about making sacrifices and about serving others— society, the country, and all beings. When doing so, they never consider their own interests. The teaching of the sages starts from here.

Education of children should start from pregnancy. Although many parents may not try to exert good influence on their children before birth, they know that after a baby is born it will be influenced by what it sees and hears. Regardless of whether a baby is able to understand, as soon as it opens its eyes it will see and hear, and it starts learning and imitating. Doing so is its nature, and nature is “dao” [the path]. At this time, the parents should exert positive influence on the baby, and this is teaching of “de” [virtue] or teaching of morality.

Fully aware of the importance of childhood education, the mother of Mencius moved three times in order to provide a good learning environment for her son. Originally, they lived close to a graveyard. At a young age, Mencius amused himself by learning how to bury the dead. Feeling that her son was not learning something good, she moved near a market. However, her son began to learn from the butchers at the market how to butcher a pig and sell pork. Seeing this, the mother moved again. This time she moved near a school. Mencius started to learn how to properly greet people, how to bow, and how to study. Seeing that her son was learning something good, she finally settled down there. The mother of Mencius moved three times to provide a good learning environment for her son, and she truly did a good job on childhood education because Mencius became a sage whose greatness was considered second only to that of Confucius in China’s academia.

Mencius learned from Confucius. At that time, Confucius had already passed away, but he left behind his writings. Mencius was the first person in China to learn from the teachings of a deceased person. Therefore, if one cannot find a good teacher, one can study a deceased person’s works. There were Confucius’ third-generation students around. Having an inquisitive mind, Mencius would go to ask them anything he did not understand in his study. He succeeded in his learning and cultivation of virtues, and he made outstanding contributions to Chinese culture.

In his lifetime, Mencius upheld Confucian ethics and teachings, opposed selfishness, and advocated benevolence, justice, and morality. However, the rulers or kings of his time did not adopt his propositions. What was the reason? It was because Mencius lived in the Warring States period (Confucius lived in the Spring and Autumn period), a time when people gradually attached importance to competition for recognition and selfish gain, and were used to turmoil and wars. The situation then was similar to today’s world. Mencius felt very distressed when he saw all this. As no ruler would adopt his propositions, he dedicated himself to teaching, imparting his wisdom, experience, morals, and viewpoints to future sages.

An objective analysis will reveal that Buddha Sakyamuni surpassed Confucius in wisdom and insight. Buddha Sakyamuni was a prince, and if he had wanted to implement his ideas through political means he was in a position to do so. But he gave up his throne, power, and wealth, content to live an ascetic life. For the rest of his life, he engaged in multicultural social education. This is the conduct of a sage. If we observe carefully, what he did in his life is perfectly correct. He set the best example for us to follow. This is his greatest contribution to humanity.

Originally, Confucius and Mencius wished to have legitimate authority, as did the Duke of Zhou, so that they could fulfill their aspirations and benefit people. This was a manifestation, or taking on a role. Buddha Sakyamuni likewise took on a role to teach people to refrain from competing for recognition, selfish gain, wealth, power, and social position. It is because the best way to serve people is to teach them. This would benefit individuals, families, society, countries, and the world. What Buddha Sakyamuni did required great insight and wisdom, not something an ordinary man could have done. Buddha Sakyamuni was thorough in what he did.

All sages have their way of doing things and they are correct in doing things that way. We should clearly observe and consider all viewpoints. Then we will be able to uncover our wisdom and to truly learn the virtues and abilities that we should learn. It is inappropriate to say that Confucius was wrong to seek a position at the imperial court and that Buddha Sakyamuni was correct to renounce worldly attachments. Both of them were correct; they simply had different ways of doing things. We must learn from different people to make our learning complete. If one has position or power, one should work conscientiously while maintaining a pure mind as Buddha Sakyamuni did. This way, one will achieve perfection in his undertakings.

The teachings of Mahayana Buddhism emphasize perfect harmony, perfect wisdom, perfect undertakings, and perfect merits. People today should try to appreciate this point and learn from the teachings. Only the sages’ teaching of wisdom can help us improve ourselves. Buddhism, teaches us to eliminate our afflictions and bad habits. In other words, we are to correct our wrong thoughts, wrong mindsets, wandering thoughts, discrimination, and attachments, and accord with the rules of nature and the order in which nature functions. We should understand the relationship between the entire universe and the rules of nature: the ultimate truth is that everything is indeed one entity and is harmonious. The universe and we are one entity.