Desire for Selfish Gain Is the Origin of All Conflicts 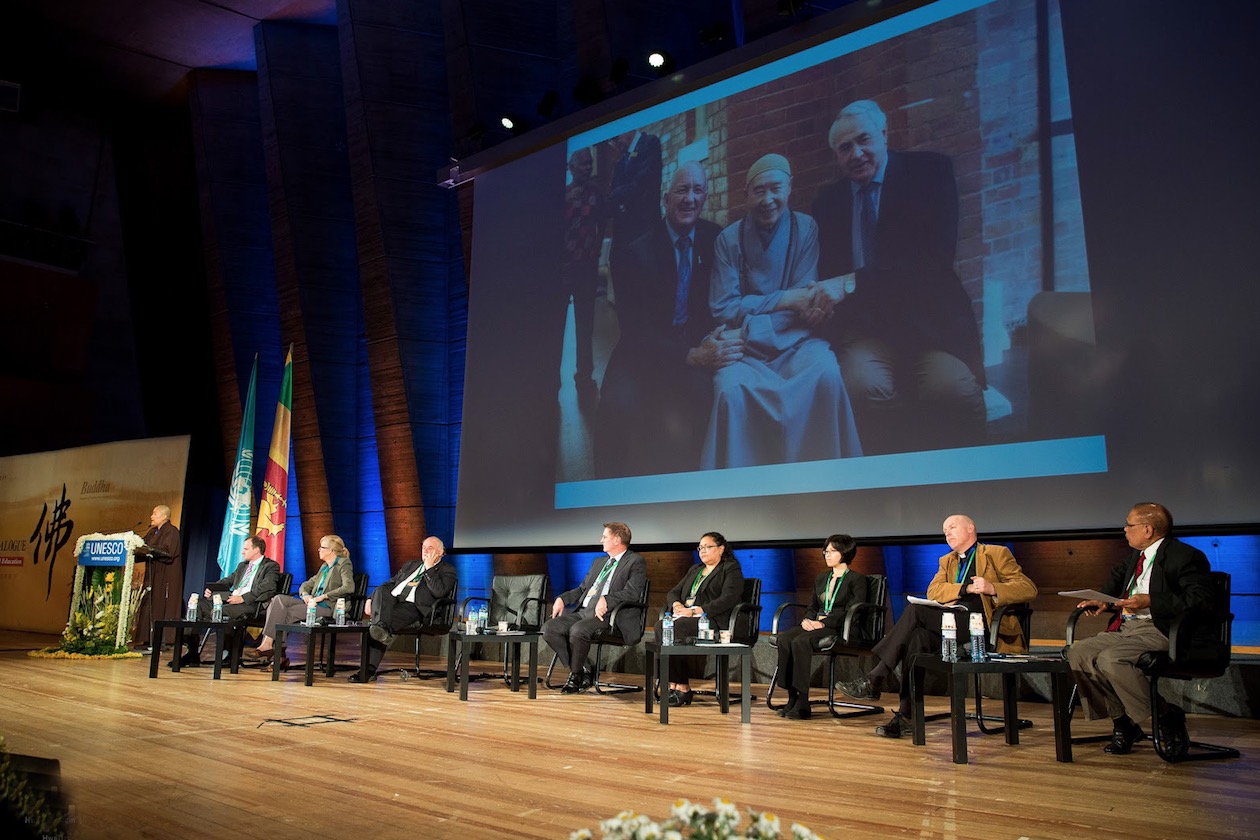 Discover the Buddhist Contribution to Humanity

“Infinitely profound and wondrous is the Dharma, which is extremely difficult to encounter in a myriad of eons. Today I get to see, hear, receive, and practice it; I wish to perceive the unfathomable meaning from the Thus Come One.” [Opening verse to the sutras] On this rare and wonderful occasion, the delegates from 191 countries around the world and I gather together to celebrate the 2550th birthday of the Buddha and to explore and learn from Buddhist contributions to humanity. Buddhist contributions to humanity refer to the Buddha’s devoting the rest of his life after his enlightenment to teaching all beings how to eliminate delusion and attain enlightenment, and to end suffering and attain happiness. He did this by lecturing on the Dharma at more than 300 assemblies for forty-nine years.

I have studied Buddhism for fifty-five years and have taught it for forty- eight years. Today, I would like to offer my humble opinions to everybody. The topic is “Celebrating Vesak. Learning from Buddha Sakyamuni: Reconciling Conflict and Promoting Social Stability and World Peace Through Teaching.” Your comments are most respectfully welcome.

In the past few years, after the tragedy of September 11th, 2001, the Australian Centre for Peace and Conflict Studies at the University of Queensland, Australia, invited me to participate in a symposium at the university attended by professors from the centre. From the centre’s report, I learned that eight universities around the world have such centers for peace.

The Australian Centre for Peace and Conflict Studies was established eight years ago and has made considerable contributions to research on resolving conflict and promoting peace. After the September 11th tragedy, however, those at the centre underwent deep soul-searching and realized that the usual methods used in the past such as suppression, retaliation, cold war, and hot war, and so on. could not resolve conflict. They wondered about the feasibility of using only peaceful means to reconcile conflict and promote peace and stability. Thus, the chancellor of the university invited me to take part in this symposium.

After I listened to the centre’s report on their research of the past few years, the chairman of the symposium asked me to make some recommendations. From the report, I realized that attempting to reconcile conflict is like a physician trying to cure an illness: it is essential to determine the cause of the illness to effectively cure the illness. Where is the root cause of conflict?

In today’s society, is there anyone who does not seek selfish gain? Mencius lived in the Warring States Period (372-289 BCE). When he had an audience with King Lianghui, the first thing the king said to him was, “Old man, you came to our state from afar. I think you must have recommendations that will yield benefit to my state.” Mencius replied, “Your Majesty, why do you speak of beneficial gain? What I have for you is benevolence and justice, and that is all.” The meaning of Mencius’ words is very profound. People compete for and are greedy for selfish gain. Therefore, desire for selfish gain is really the origin of all conflicts.

To reconcile conflict, it is imperative to decrease and eventually let go of the desire for all selfish gain. The opposite of selfish gain is benevolence and justice, which is compassion (cibei) as taught in Buddhism. Benevolence is “ci”—helping all beings attain happiness and sacrificing oneself for others. Justice refers to helping all beings end suffering. It is equivalent to “bei”. Therefore, Buddhism advocates “Compassion is the essence, and expediency is the means,” while Confucianism teaches benevolence and justice. Although the words used are different, they convey the same meaning. Mencius’ method of solving a problem is exactly the same as that of the Buddha: they both start from the root causes.

From this, we realize that to resolve conflict and promote social stability and world peace, we have to stop competing for recognition and its gain, and actively promote the teaching of benevolence, justice, and compassion, a teaching that will help all beings attain enlightenment. This teaching is the same as the teaching of love taught in religion: God loves people. Through careful observation, we will really appreciate that all the great sages in every country throughout time and the founders of the major religions, who were all sages, had completely renounced selfish gain and greed, and had a pure mind. Therefore, they practiced what they taught and were able to teach others to practice. They exerted far-reaching influence during their times and on future generations.