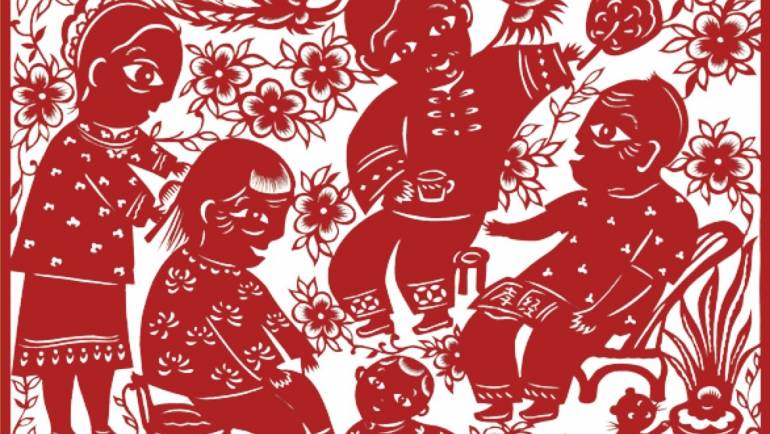 Speech at the Global Ancestral Remembrance Ceremony at UNESCO

My warmest greetings to you all.

Today is an auspicious day when all divinities are delighted. Being blessed by God of all religions and faiths, we are overjoyed and most grateful that the Global Ancestral Remembrance Ceremony is solemnly held here at UNESCO headquarters for the first time， and that we are to remember the ancestors of all families of all ethnicity throughout the world. This is a ceremony that is worthy of remembrance in the cultural history of humanity.

People of every ethnicity in the world have their own way of remembering and expressing respect and love for their ancestors. Today, we are to experience the ancestral remembrance ceremony of Chinese tradition. Throughout the history, Chinese people have attached a particular importance to remembering ancestors. From the emperor down to ordinary people, ancestral remembrance ceremonies were held twice a year in spring and autumn. But what is the significance of these ceremonies?

A. Remembering the virtues of ancestors and advocating the teaching of filial piety of love and respect

The first significant aspect of an ancestral remembrance ceremony is to remember the merits and virtues of our ancestors and also to advocate the teaching of filial piety of love and respect. Only with firm roots can a tree flourish and bear blossoms and fruit; only with a source can a river continuously nurture the earth. Similarly, only as a result of our ancestors’ hardship and toil can the descendants enjoy prosperity, peace, stability and happiness. It is a fundamental virtue of a human being to remember the kindness, merits, and virtues of his or her ancestors. Inheriting our ancestors’ excellent traditions is to expand our love and respect towards our ancestors, and it will benefit both present and future generations. Consequently, it is the best way of expressing our gratitude for our ancestors’ kindness.

Every ethnicity and every faith attaches great importance to xiao (filial piety), that is, the profound love for ancestors and parents. Extending such love to all humans is the foundation of world peace. From this perspective, xiao is the universal love towards all people equally. An ancient Chinese classic The Classic of Filial Piety states, “The late sage-king had sublime virtues and an important way. With them, everyone under heaven willingly followed his leadership, the people were in harmony, and there were no ill-will between those above and those below.” But what exactly is the way that will bring peace, harmony, mutual love and respect, and cohesion between the government and its people? Confucius continued,“Xiao is the root of all virtues and it is also the source from which education stems.” Therefore, the late sage-king’s important way of sublime virtues is filial piety. Teaching and transformation begin with filial piety.

One of the themes of this year’s peace conference at UNESCO is to remember the late King Bhumibol of Thailand. The King loved his people like his own children and was also deeply loved by his people. He reminds us of a patron of Buddhism in Indian history — Emperor Asoka the Great of the Maurya dynasty. In order to promote Buddhism and educate his people, Emperor Asoka had thirty-three edicts inscribed on rocks including loving and providing for parents, respecting and serving for teachers, and haboring compassion without killing. These rocks are therefore called Emperor Asoka’s Rock Edicts. The teachings inscribed on the rocks coincidentally resonate with the purpose of the ancestral remembrance ceremony held today.

The Bible says, “He who loves God will plead with him on behalf of sins, and will keep himself away from sin, and will be heeded in the prayers of his days.” “And, like one who stores up treasure, so also is he who honors his mother.” . . . “He who fears the Lord honors his parents, and he will serve them as masters, for it is they who conceived him.” (Sirach 3: 4-5,8)

The Qur’an says, “He, who wishes to enter paradise at the best gate, must please his father and mother.” (Bukhari and Muslim)

The Sikh scripture says, “The service and worship to the gods and goddesses are useless if one has to renounce his parents.” (Varan Bhai Gurdas Vaar 37 Pauri 13)

The Bahá’í Writings say, “Blessed is he who remembereth his parents when communing with God.” (Selections, 3:22)

A Taoist text, the Accounts of Request and Response says, “Be loyal to our duties. Be filial to our parents. Be loving to our younger siblings. Be respectful to our elder siblings. Transform others by correcting our thoughts, speeches and behavior.”

From the words above, we can clearly see that similar to ‘benevolence, compassion, and universal love’, filial piety is also a common language of all ethnicities and faiths.

Such an entity is not only a time based one, but also one based on space. In this entity, there is innate love between parents and children. This love is the origin of the love in our true nature, and this love is inherent in every human being. This is why The Classic of Filial Piety says, “To educate the people to love one another and live in harmony, there is no better way than educating them about filial piety.” In that we know the universe is one entity, we must love everything and all beings in it. The spirit of benevolence and love found in the teachings of traditional Chinese culture is extended from parent-child love to the love for one’s ancestors, family, ethnic group, society, country, all humans, and countless generations to come. If we can promote the spirit of the one entity of xiao, the world will enjoy lasting peace. This is why The Classic of Filial Piety says that xiao is the ultimate virtue and essential way of bringing harmony to the world. It is therefore clearly stated in the same book that, “When a leader practises xiao and ti (sibling love) to perfection, his sincerity will be known to divinities, the light of his innate virtues will shine on the four seas, and there will be no obstacles that he cannot break through.”

The main reason for the chaos in the world today is selfishness: people only love their own country, their own political party, their own ethnic group and their own faith. However, they do not love those of others. If we can deeply feel that all humans are one entity, we will be able to find equal treatment and harmony between countries, between political parties, between ethnic groups and between different faiths. Consequently, we will achieve world peace.

We can learn from the analysis of British historian, Dr Arnold Toynbee. He said, “The teachings of the Buddha do not differ in the respect from those of the Chinese philosophers Confucius and Laotse, or of the Ancient Greek philosophers Socrates and Zeno, or of all the Hebrew prophets from Amos in the eighth century B.C. to Jesus.”

Dr Toynbee sincerely cautioned people, “These spiritual leaders were manifestly on the right track. We ought to follow their lead today.” His words remind us that we ought to retrieve and thoroughly practise the teachings of ancestors and sages of the East and the West. Only then, can we recover the stability and peace of the world.

B. Educating the people with propriety and music, placing harmony at the centre of everything

The second significant aspect of an ancestral remembrance ceremony is to educate the people with li (propriety) and yue (music) and subsequently cultivate their harmonious disposition. The Classic of Filial Piety says, “To change social practices and customs, there is no better way than using music. To stablilize the government and to peacefully govern the people, there is no better way than educating the people about propriety.” It shows the importance of propriety and music in promoting harmony in society and good social practices and customs.

Rites and propriety represents the natural order between heaven and earth, and regulates human behaviour. It tells us how humans should interact with other humans, with nature and with everything in the world. The music in traditional Chinese culture refers to the sounds of virtues and the tunes of elegance, not the sounds of decadence. Music represents the natural harmony between heaven and earth. Elegant music can harmonise the seven emotions and five desires of humans. The five desires are desires for wealth, lust, fame, food and sleep. From them, humans develop seven emotions, that is, bliss, anger, sadness, happiness, love, hatred, and craving. The function of music is to control the five desires and seven emotions so that “they are not released excessively and uncontrolled.” By using music, we learn to standardise and confine our speech and behaviour, perfect ourselves and eventually reach the ideal state of morality.

The instruments used in the ceremony are also special. The function of playing the drum and striking the bell is to draw attendants’ attention and remind us that we must be most sincere and respectful during the ceremony, and respectfully inherit the traditional culture from our ancestors. This also serves the function that we see that both the drum and the bell are empty inside. When we strike them heavily, they make loud sounds; when we strike them softly, they make soft sounds; when we do not strike them, they make no sound. The Chinese use it as an analogy to indicate that a pure mind produces wisdom and with wisdom a person can deal with all kinds of changes at ease. All the instruments used are traditional Chinese instruments including guzheng (Chinese zither), guqin (ancient zither), sheng (Chinese reed aerophone), bamboo flute, xiao (vertical bamboo flute). The music pieces include the Harmonious Tune, the Peaceful and Harmonious Tune, the Serene and Harmonious Tune, and the Bright and Harmonious Tune. All these pieces convey the messages of peace, stability, and auspiciousness, and they also reveal the Chinese philosophy that peace and harmony should reign supreme.

Educating people by using propriety and music will result not only in the good moral character of individuals but also in good social practices. This type of education stresses that people need to understand about being content, fulfilling duties, and thus result in gaining respective postion in life. Subsequently this will develop cultural consciousness. “A land of propriety and music” is an ideal land of sages and the virtuous, where everyone likes giving away and does not compete with others regardless of gender, age, wealth, and status. This aspect also resonates with the other theme of this year’s international peace conference: If we choose rivalry, conflict, and war, the human race will suffer from never-ending disasters. If we abandon rivalry, conflict, and war, the human race will enjoy boundless good fortune and joy.

Today, with utmost sincerity and reverence, we take the great opportunity to remember the ancestors of all ethnic groups throughout the world. It opens a new chapter in the world history of intercultural dialogue. By communicating with and learning from one another, we are able to see that people of different cultures and faiths can work together and integrate with one another. This will inject a huge source of positive energy towards world peace.

Here, we sincerely wish every country enjoy prosperity and that their people live in safety and happiness! May every ethnic group, every culture, and every faith interact with one another impartially and live in harmony! May the world be peaceful and have everlasting perfect harmony! Thank you very much.